Everyone’s got a PET PEEVE.  Some shit that just ruffles your feathers and gets your eyes redder than a mandrill’s ass.  It’s dreadful, and can range from your Mother-In-Law’s pesky habit of breathing to the synthetic death grip of your too tan, control-top pantyhose.

Now, being that there’s about 1.5 MILLION people for every 22 square miles of this pretentious little borough, you can bet your fake Fendi bag that I got a whoooole bunch of PET–MOTHER-FUCKING-PEEVES.

Just in case you don’t know what a Mandrill’s ass looks like.
You might be thinking right now:
“With that mouth of yours, you’re starting to become one of MINE…”
But just hold up….I ‘m getting to a point here that’s more prevalent than a wedgie on a summer day.
Here’s the deal.  We all have “THAT FRIEND”.  You know, the one who, no matter what, you can whisper through clenched teeth to.  The one who brings your boiling blood to a tolerable and controlled simmer with a well timed alcoholic beverage and tells you in a “THAT FRIEND” kind of way to just:
“Calm the FUCK down.”
The one who reminds you, that sometimes:
“You can’t control every situation, so for the sake of your OWN sanity, and CRIMINAL RECORD, you’d best SHUT UP, act like the *lady* you’re not and  just, GET USED TO THAT SHIT.”
You’re ’bout ready to put away that gas face and throw down but, because you know she’s right, you bite down, smooth out your Strawberry’s satin sheath, and curl you lips up into a painful smile.
You’re bearing it.
You HATE it….but you’re bearing it.
Ok, here’s the part where I pull back on the Google Map and put shit in PERSPECTIVE.

“You’re lucky my homegirl said to spare you and that dumb-ass hat…”
ENTER: PARENTHOOD….
Remember “THAT FRIEND”???
Yeah, well, that bitch has been replaced by a tiny little, wormy being, that has sprung from your crotch.
Good luck with that much needed alcoholic glaze, and if you thought a seam in your tube sock was bad try…..
NEVER SLEEPING FOR MORE THAN 3 CONSECUTIVE HOURS.
ANY HAIRSTYLE YOU SPENT MORE THAN A NANOSECOND ON.
ABHORRING YOUR CUTEST AND MOST COVETED HIGH-HEELS.
A SOCIAL LIFE MORE BARE THAN A  SCORES STRIPPER AT 4AM.
You thought your life was oh so *real*, riddled with heartache and strife and then….
….you have KIDS.
You don’t necessarily realize it as it’s happening, but as you’re thrust into the greatest depths of selflessness bearing and caring for a child, you have become the MASTER of:
“GETTING USED TO THAT SHIT.”
“Well, she’ll fall asleep if I bounce her for about 10,000 more minutes…”
“He likes nursing until he spews tit milk all over, so I usually nurse on the hard floor…”
“You gotta cut those grapes into unrecognizable nibbles and bits for her to not choke…oh, and skin them shits too, here, I’ll show you how…”
“I’m totally functional, well, functional enough, on 37 seconds of sleep…”
You don’t have a choice.  You don’t even have a “THAT FRIEND”….
You have a baby…a responsibility full of the peeviest-pets you’ve EVER encountered….and guess what…?
You do what you GOTTA DO, to simply:
“GET USED TO THAT SHIT”.

You’d better do more than just “THINK” you can, bitch.
You’re a parent.
You’re dedicated to being a parent.
You LOVE your child, even more than you thought you loved that pimply douchebag who popped your cherry….
…maybe even more than you love your own mother…
So, you bite your lip, take it down more notches than a pile of belts at a Weight Watchers meeting, and feel sorta proud that you were able to GET USED TO some ridiculous shit NO human should legally have to endure….
….Annnnnnd….
THAT’S the exact moment that your kid, (the much shittier and selfish version of your single life’s “THAT FRIEND”) decides you’ve had plenty of time to get USED TO this set of shenanigans, and instinctively indulges you with a whole new gamut of fucked-up challenges that’ll send you to hell and back.
You’re like the fucking Karate Kid except with a Mr. Miagi who’s on the permanent rag.
Don’t worry though, you were MADE for this.
You’re becoming a black belt in art of insomnia.
You may not be able to catch a fly with a pair of chopsticks EVERY time, but you sure as hell will get USED TO trying.
So, keep your temper down, and your caffeine up, and remember, from one mother to another…
WAX ON BITCHES. 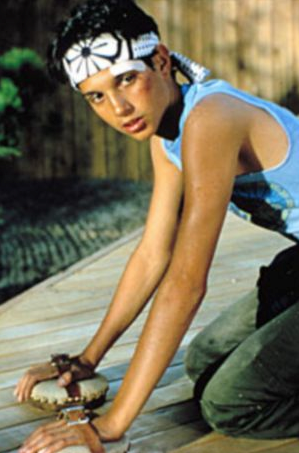 What’s a Macchio gotta do to get a BREAK around here?!?