You know what’s the hottest gift for kids that’s NOT flying off the shelves this holiday season??

remember this pointless fad??
Now I’ve actually bought these toys.  I’ve fought bitches in the store for the last whateverthefuckitis on the shelf and wrapped it gingerly with curling ribbons, certain that I would be the coolest mom on the block for acquiring such a sacred and sought after item.  And when my kid rips that paper open and her eyes light up like a pair of bedazzled jeans I AM the coolest mom … at that moment… and maybe even the next day.  Hell, I might even be the shit all the way till New Year’s Day!  But then, there it is, the motherfuckin’ Hottest Toy of the Year, shoved in the closet, crammed in a pile with the Hottest Toy of Last Year and right on top of the Hottest Toy of the Year Before That.
So here’s the thing.  Guess who’s feeling like The Bomb now?  Not you for getting the piece of shit toy, not your kid for owning the piece of shit toy… it’s the manufactures and marketers lining their pockets with the money you spent on a notion.  A name.  An idea. A piece of shit.
Don’t feel bad though.  It’s not your fault…  Well, not really….. Ok, it kind of is.  Listen, we all want to do right by our kids.  We love our kids, but unfortunately the world tells our kids to love STUFF. It’s not just kids either, they’re just the easiest, most gullible demographic.  The fact is, we ALL have been told to love STUFF…. and so, we do.  Shit, I fucking love STUFF too!  And that, my friends, is where we’ve all gone wrong.  Yeah, yeah, I know this is a capitalist society that’s pretty much supposed to run on money.  The buying, the selling, the consumer, the seller, etc. which would be great and all if it wasnt corrupted as hell with all these big business motherfuckers stealing all the money from us working folk.. but I’m not even gonna get in to that whole thing ’cause it takes too long and I don’t feel like getting pepper sprayed in the goddamn face.  My point is, because we’re all so programmed to believe that STUFF makes us happy, when our kids come to us, begging for the latest, hottest STUFF, we want to make them happy and we fucking buy it.

Yup.
America has always been about STUFF.  My granny came to this country as a young woman to flee war had have the opportunity to have mo’ better STUFF for her and her family, as many of our grannies did.  But STUFF was different then.  There wasn’t as much STUFF first of all, and it wasn’t getting shoved down your throat via TV, advertising and most importantly, the internet. Nowadays, we all get exposed to a constant, flashing, streaming never ending river of STUFF and because of that, it’s lost a lot of it’s meaning.  Faster then you can say “lalaloopsy” there’s another image shoving the first one out of it’s way claiming to be better, cooler, more desirable and therefore making what preceded it, outdated, obsolete, disposable.

Many immigrants came here with only as much STUFF as they could carry on their backs… you think these kids are thinking about toys??
Remember Cabbage Patch Kids?  Yeah I wanted one, yeah I needed one, fuck yeah,  I got one and my mom did many years ago what many moms still do today.  She braved lines, shoved her way through crowds, and pushed aside more then one bitch to get it for me.  The difference being that there wasn’t twenty other HOT toys pushing it aside with advertising.  Children’s programming was limited, and so, advertising targeted at children was too.  Oh, and there was no internet.  And you know what?  I LOVED that motherfucking doll for YEARS.  I still remember that bitches’ name to this day: Annibel Fanny.. no lie.  I even remember that signature on her ass verifying her authenticity.  See, STUFF wasn’t as accessible.  STUFF meant something.

I would’ve been SO jealous of these motherfuckers back in the day!
Look!  Even the boys have ’em.
So, what does all this mean for me and my kids?  Well, it doesn’t mean I’m not getting my kids STUFF for Christmas this year, just maybe a little less.   And it doesn’t mean that sometimes STUFF won’t bring you a bit of happiness.   This year though, I’ll take the kids with me to donate all their Hottest STUFF of Last Year to the Ronald McDonald House and show them that a little humility can be a gift worth getting.  Not to mention, it doesn’t require batteries AND has a lifetime guarantee. 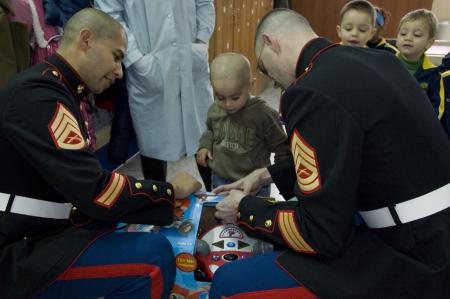