It happens.  You say the wrong thing, you do the wrong thing, and before you can say “oops!”, it’s too late.   You fucked up… and now, you feel like a dick.  No worries, here’s four things you can do to de-dickify yourself:

1. Time.  Let it create some distance between you and your dicky move.  A lot of times you feel like more of a dick then people actually feel about you.  So just lay low, be a soft dick if you will, and before you know it, someone else will pop up and be a dick, therefore replacing any memories of your dick move.
2. Apologize.  Sometimes if you blurt out something dicky and then immediately slap your hand over your shit spewing mouth only uncovering it to profusely apologize, you will be forgiven.  Sometimes, not.  But you lose nothing with an apology.  Even if the offended only half accepts your apology (which HAS to be as sincere as possible) they might just refer to you as sometimes being a dick instead of being a total dick.
3. Blame it on the A-A-A-A-A-Alcohol.  This is a tricky one.  You CAN over-use this one so be careful.  It definitely, if used very sparingly,  is the quickest and most effective way to de-dickify yourself.  In fact, if you usually never drink,  alcohol is pretty much be a FREE DICK PASS, but watch out!  It only takes one too many times of using this excuse to label you as “That drunk dick” in which case you’ll be watching your friends check in to a million parties on FB while you sit home alone in all your dickass glory.
4. Don’t be the only dick on the block.   Owning your dick move is a perfect way to get others to share their dick moves with you.  Being a dick is not unique, owning up to it is.  That’s why it benefits YOU to admit it.  Before you know it, you’ll find yourself conducting your very own Dicks Anonymous  pow-wow and instead of crying about your recent dicky moves, you’ll be laughing at someone else’s.
Now that that’s out of the way, I’m here to help you out with #4.  Not that the other’s don’t work (they do, I’ve tested them all) but because I haven’t made a dick move in a minute, and perhaps you have.  You see,  I want to be the giver here and let you know, you’re not the only dick on the block……
The time a saw a woman with a newborn.  She looked tired (of course) and I felt bad for her… I also felt more experienced and thought her cute for being a new mom.
“Your first?” I asked smiling sweetly, to which she replied:
“My fourth.”…. and then I felt like a dick.

The time my mother had just gone clothes shopping and was very excited to show me her new stuff.  “Try it on!” I told her,  and so she comes out wearing this blazer.
“It’s nice,” I tell her “but I think it would look a lot better without those shoulder pads... to which she replied:
“I’m not wearing shoulder pads…” ….. and then I felt like a dick.

sorry mom, don’t worry, broad shoulders are the new black….
The time I gave my hair a little extra attention and blew it out because I had a few hours without the kids and I wanted to actually appear like a normal human on the street.  Well, I was pretty sure I did a good job and was looking possibly even like a hottie ’cause I was getting a lot of smiles and attention out and about.  “Wow!” I thought,
“I should wake up a little earlier and blow my hair out every day! I must be looking gooood, yeah!”.
I stop at the corner feeling like a fucking superstar and this little old woman looks at me.   She mumbles something and I notice that her facial expression is strange.
“What’s that?” I say, leaning in closer to hear her, and in a little voice she says:
“Your shirt button is open dear..”  :O  Yup, sure enough my shirt is wide open exposing more then just a little bra action.
With cleavage spilling everywhere I clutched my chest, and practically turned purple ….. and then I felt like a dick.

See, even Eva Longoria feels like a dick sometimes.
And finally, the time I went to a friends baby shower (yes baby shower ) and got a little too WASTED (yes, wasted) and became too mouthy, probably a bit rude (yes, just a bit, wise guy) and ended up leaving  (or was I escorted out?) but not before kissing my other friend’s five month old so hard on the cheek, he subsequently started screaming.  Oh, did I mention I was with my 6 year old?  Oh yeah, it took me until the next morning, but as my groggy brain started collecting snatches from the night before it was ……. then that I felt like a BIG DICK. 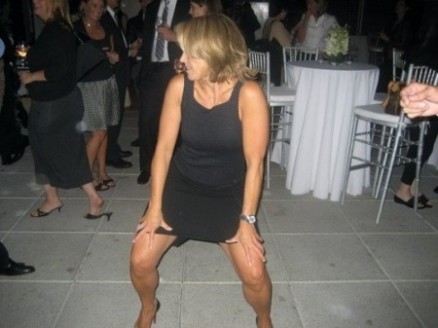 That’s all I got for you right now, but I’m sure it’s enough to bring you a little closer to admitting and owning up to any recent dick moves you’ve made.
Remember, everyone’s a dick sometimes, and if you say you aren’t, you’re being a dick right now.
Love,
PaRANThood